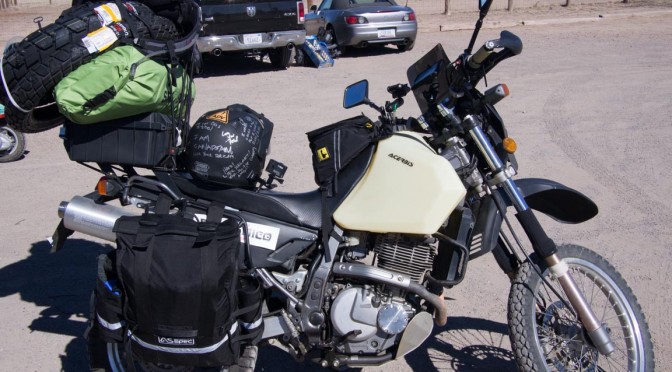 The bike I’m piloting is a 2000 Suzuki DR650SE, with, at the start of this journey, a little over 16,000 miles on the odometer. I chose this machine for a number of reasons:

I’ve done a ton of mods to my DR650; none original, most culled from various website and forums around the internet. For a full list of items I’ve installed (and their cost), check out my Google spreadsheet.

I hemmed and hawed for a long time over what type of luggage system I was going to use; you basically have two choices, soft or hard.  While hard luggage provides more security (hypothetically), there are many stories of people falling over or crashing with their legs being crushed by the panniers.

Since I like my legs, I decided on soft panniers, but I wasn’t completely sold on the security aspect until I found these ‘Magadan’ panniers made by Adventure-Spec:

What sold me on them was the fact that you can lock them with cable locks, and they are pretty huge.  Inside each bag is another waterproof dry-bag that can roll down to many sizes.  I affixed a Master Lock Python adjustable cable lock to each bag, through the loops stitched onto each bag, and while I should have bought the  4- or 6-foot locks instead of the 8-foot, they’ve worked great so far.

The huge pockets are a big plus as well; you can fit a quart of oil in at least 2 of them.

To mount the luggage, you also need some racks, and one can spend just as much on rack as you can panniers.  Luckily I found some good ol’ made in ‘merica racks from Precision Motorcycle Racks, specifically their Side Luggage Racks and their Rear Case Utility Rack. 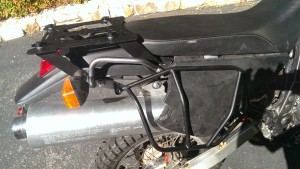 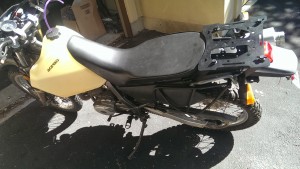 On the rear (or top) rack, I mounted a Seahorse SE630 case, where I  keep all my electronics and valuables.  It’s locked down by two Master Locks as well. It’s a bit smaller than cases others have used, but I’ve managed to fit most everything I use inside.

Also, the tires I had strapped down have since been installed, saving me a ton of weight and reducing the windjammer nature of the fully-loaded DR650 in heavy crosswinds.

Besides the luggage, I’ve taken a number of precautions to secure my motorcycle and belongings.

Most importantly, I’ve got a motorcycle cover; hey, if you can’t see it, you don’t know how good or bad it is, so why bother, right? I’d show you a picture, but it’d be pretty boring. Imagine a tarp over a motorcycle, done.

I also have a longer cable lock that I use to pass through the frame and some larger object; I debated on using a massive chain but couldn’t justify the weight.

For the large green bag that contains all my camping gear, I have a PacSafe 85L Bag & Backpack protector, which is essentially a large wire mesh that you can lock down.  I’ve yet to use it as I’ve either camped or taken my stuff into a hotel room, but I’m hoping it’ll work out well.

Finally, I use a Xena Disc Lock with Alarm, that’ll blast an annoying repeating tone at 120 dB if disturbed. The only problem is that sometimes I forget I left it on the motorcycle as I drive off. 😉 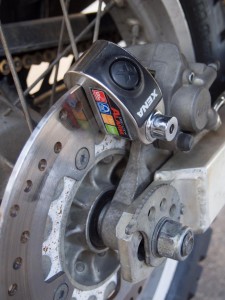 Finally, for personal protection I have brought a M32 MGL (Multiple Grenade Launcher), as well as my wit, charm, and a Spanish phrase book.  Here you can see how I mounted the M32 to the motorcycle with $1.99 neon green bungee cords. 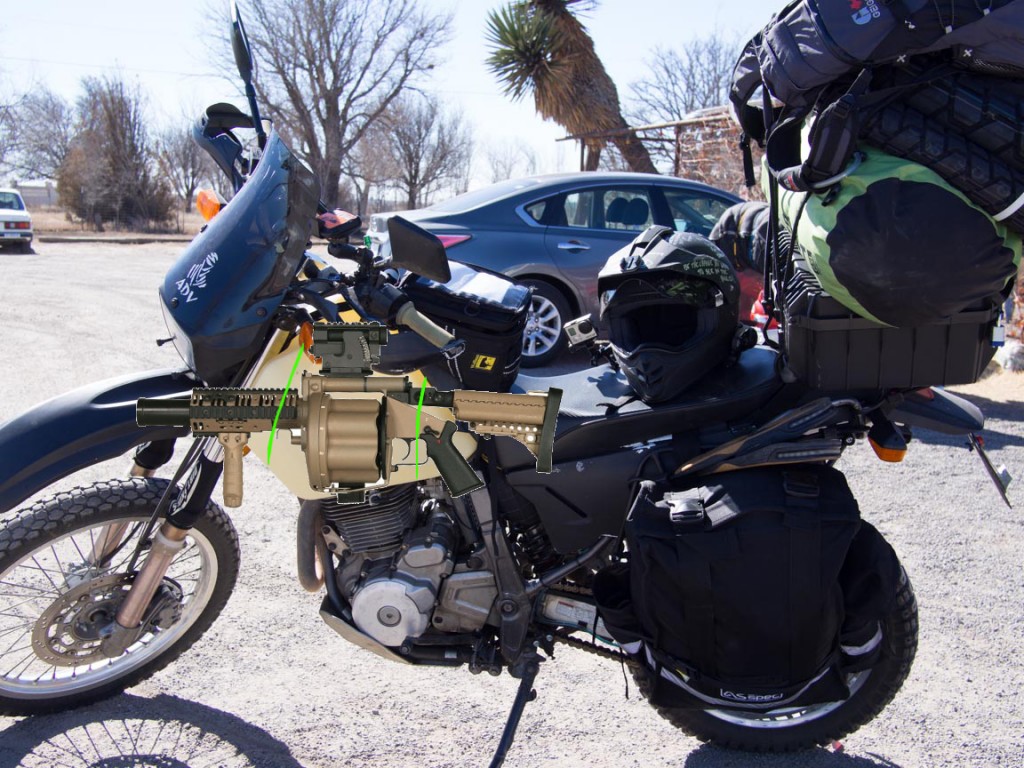