So, I woke up in the fluffiest bed ever conceived in a swank hotel in Puebla, fully rested and ready to get some more road grim on my riding suit. Gearing up, I headed downstairs to the hotel lobby where my iron stallion had spent the night, under a beautiful vintage spiral staircase, presumably venting Magna gasoline the entire time.

The raised eyebrows of Puebla’s visiting elite while drinking their cappuccino’s made me smile, so I made sure to let out a hearty roar from the single cylinder 650 cc engine as I rode through the lobby over granite tiles and out into the streets of Puebla.

Would I recommend this hotel? Oh yes.

Anyway, enough about my $100 lodging. The ride to Oaxaca was supposed to take around five hours. 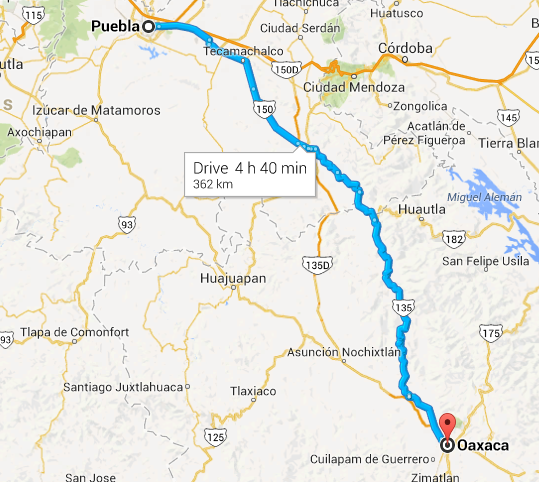 It took more like seven as I hit some traffic on the way there. And as most things on this trip so far, this wasn’t normal traffic. No, a few hundred locals with some grievance had decided to take over the toll booth on this particular cuota, so traffic didn’t flow for a few hours as we waited in on the highway for the protest to abate. Looking at my map, I didn’t have near enough gas to turn around and take a side road, so, wait I did.

After 30 Mexican minutes (or 2 hours), the protestors started letting cars through again. They stopped people, myself included but, at the time, I had no idea what the heck they were talking about. In hindsight I think they wanted money for their cause.

Let me back up a wee bit, as the ride from Puebla to Oaxaca was pretty exhilarating.  There’s a stretch of wide, sweeping turns through the Sierra Norte mountains that provides ear-to-ear grinning rides.  Sadly there’s also high traffic in this area from regular colectivos, Toyota Hiace vans that run the regular stretch from Puebla to Oaxaca, and charge a flat fee per person. They’re all over the road, and the Latin machismo is readily experienced as they hug the centerline, not wanting to let people pass them. I digress. Oaxaca has some Mexico’s most rugged terrain, as four mountain ranges intersect in the state. It’s also dotted by these pretty purple flowering trees everywhere, whose name I have yet to discover.

When I finally arrived in Oaxaca, I (once again) had around 3% battery life left on my phone and was eager to find a cheap but safe hostel after the previous night’s hotel binge.  Riding around the colonial city filled with numerous one way streets, I stopped and inquired into numerous places, but all were far above my price range or did not have adequate parking for my motorcycle. Those Spaniards didn’t exactly build the roads wide enough for mass parking, and empty storefronts that double as parking garages indicated everyone’s looking to jump on a free spot.  Eventually though, I found a hostel that charged 100 pesos a night and would let me keep my motorcycle in their courtyard.

The place was really basic, I mean, they didn’t even have toilet seats. But hey, for $7, can you really complain? And I at least got a 4-bed hostel room for myself, which was nice. I got settled in and headed out to the zocalo, the main city square where tourists and locals congregate, merchants sell their wares, and restaurants line each side of the quadrant.  I started to do a lap but stopped short when I heard my name; who should I see drinking a beer but Bill and Dorothy Bell, the awesome couple I had met back in Mulegé, BCS. Completely random! Sadly I didn’t get any pictures, but they told me how they had been traveling around a while and decided to rent an apartment in Oaxaca for a month and just enjoy themselves.  I remember Bill leaning over to me as well and saying, “Welcome to REAL Mexico.” Man, he was right. We shared a few more beers and then they went on their way, as Bill was scheduled to have some dental work (which is so much cheaper here in Mexico) done the next day.

I’m actually surprised I have no real shots of the center of the zocalo. Sorry about that folks!

So perhaps you’re wondering why I stopped in Oaxaca in the first place? The answer is fairly mundane; pretty much every traveler I met told me to go by there, and I wouldn’t regret it.  I’m not sure how this place got on everybody’s radar though; as best as I can tell the 2006 protests brought the place to the attention of the global community, but that’s not really a reason to visit.  As the photos above show, there’s certainly still some dissent in the area, but it’s all very peacful. Certainly Monte Albán is a famed archaeological site many historical types would like to see, but you have to wonder how many come visit after seeing Teotihuacan right outside of Mexico City. My guess?

It is so delicious there. The mole sauce is exquisite, a strange and amazing mixture of spices and chocolate. There’s actually seven different kinds, but I only tried one, the black. It’s pretty easy to mess up mole sauce, but here in Oaxaca, wow, it was incredible.  And don’t even get me started on the tlayudas.

And of course they have grasshoppers (which are surprisingly quite scrumptious).

So, I wandered around and explored the city a bit before heading back to the hostel to catch up on some sleep.

While there I met a couple of Americans, John and his friend whose name escapes me (another common theme to this trip), who invited me to drink their mezcal with them. Well, what kind of hostel guest would I be to refuse? So we proceeded to drink some beers and then paint the town red. John was there visiting his friend, who lives in Guadalajara and codes websites to earn a living, and both had come to Oaxaca to relax for a bit. The night desk was staffed by a young dude named Miguel, who used to live in Arizona but had gotten kicked out of the States for various misunderstandings (as often happens in one’s youth). He was hilarious!

I stayed in Oaxaca a total of two days, and the three of us just drank beers and walked around the city, admiring the sites. At night we’d go to local bars, of which there are quite a few due to the city’s medical school, and hit on various groups of med students in broken Spanish. It was as hilarious as it sounds.

I managed to find time to get my hair cut and beard trimmed (professionally) for the princely sum of 70 pesos.

We even sampled some local street cuisine, chicken quesadillas with hot sauce for 15 pesos.

Anyhow, those two had to go back to their respective real lives (hah) and headed out a day before I did. This gave me a great chance to check out another great sight in Oaxaca, the Templo de Santo Domingo de Guzman, a gorgeous church and monastery with Baroque stylings everywhere. And gold, the interior covered in gold everywhere. You absolutely can not miss this place.

On my way out I was greeted by a parade, complete with effigies.

Can’t beat that with a stick.

And that’s about it for my Oaxaca experience. Saw some churches, met a lot of friends, ate amazing food; I completely understand now why people like the Bell’s would want to stay a month, and why travelers always recommend it. I could have easily stayed another week.

Sadly, I had to move on; amigos from Austin were due to arrive in Playa del Carmen in less than two weeks!