I’m not sure where or when I first heard about Los Frailes, most probably some random travel blog while researching this trip, reducing whatever information I gleaned to some red marker on my Google map. Regardless, my beach quotient at this time was precariously low. I know, you’re thinking, “but Phil, haven’t you been at the beach this entire time?” Absolutely not sir, I’d respond, merely visiting a beach is not the same as enjoying oneself at the edge of an ocean. If it were, the thousands of images of pristine coastlines and beaches on Flickr would be enough for any would-be traveler.

There are two ways to get to Los Frailes (or Cabo Pulmo, the tiny town 4 miles away) from Cabo San Lucas; one involves around two hours of deep sand riding up and around the East Cape, while the other is riding the MEX1 highway north and looping around back south.

I’m pretty sure you can all guess which route I took. 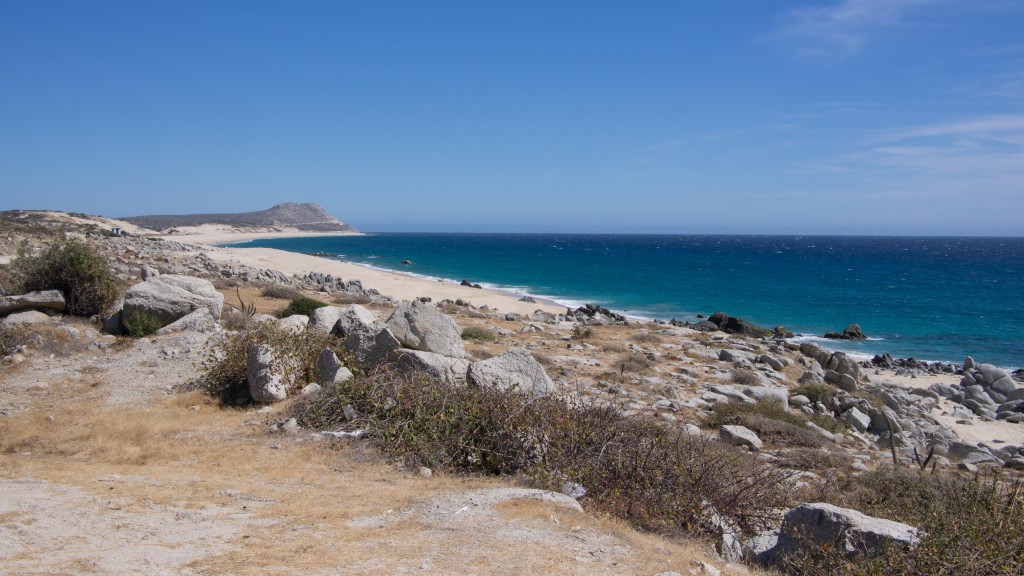 The road inches its away along the coastline for a good while, with multiple sandy switchbacks greeting you at every turn, and of course there are no guard rails.  A few shrines greet you at the tops of some of the hills, and peering down as you ride by, it’s difficult not to imagine the last moments of whichever poor soul it was that miscalculated and drove off the cliff. For the most part, my ride was fairly uneventful.  At one point the wind picked up and I lost my brilliant AAA map of Baja.  I turned around and searched for a while, eventually giving up; I was near the end of the Baja portion of this journey as it was, and who needs maps anyway?

Another time, I spotted my first burro, pacing up the road.  He stopped for a quick picture before bounding away through the dunes. 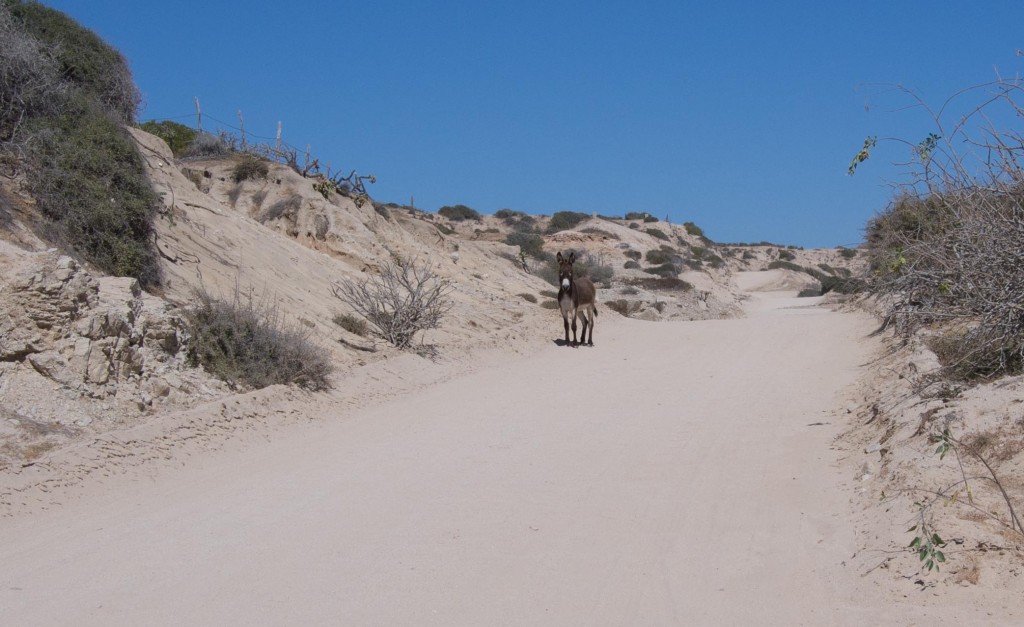 About an hour later, I was in Los Frailes. It’s pretty remote, save for the large contingent of snowbirds and their RVs, all from Canada of course. I picked a spot near the end of the beach and set up camp under a palapa, watching the sun set and a few yachts pull in to dock for the night.

Then I met my neighbor, Bernie.

Bernie is originally from Köln, but has lived in Canada for the last 31 years and, as he explains it, “I spent 1 winter in Canada and the last 30 here in Los Frailes.” This guy is a straight character, and an establishment himself in Los Frailes; everyone knows him and he regularly has visitors. He chuckled as he told me some young couple a few years ago had asked if he was “the Uncle Bernie we read about” on the internet. In the summers he hauls and sells organic fruits and vegetables in a 10-ton truck for a few months, saving up some money. Then he travels south every year to Los Frailes for 6 months, in his custom Mercedes MB100D camper van, though (as he latertold me), he’ll be selling it soon for a VW since everyone gets hung up on the Benz logo.

Here’s a video of the interior as well; hot water, shower and toilet, what more can you ask for?

After talking for a while, I had to ask the man (in a very Office Space-esque manner):

What exactly is it that you do all day here?

He thought this was hilarious.

What do I do? What do you mean what do I do? I wake up, I catch some fish, I cook and eat the fish. Maybe I go kayaking or snorkeling later.  I have some lunch, maybe do some reading or more kayaking in the afternoon, and ja, before you know it the sun is setting. And we have some beers like we are doing now and then time for bed.

It didn’t sound like too much to me at the time.

We were then joined by Bernie’s friend Kai, who also lives in Canada, but in the Yukon.  According to him, it’s a very German place, reminding a lot of them of the great outdoors and the Black Forest and what not.  Dude has a seaplane he uses to get to his home and to town when in Canada. I didn’t catch what Kai did for a living, but one evening I showed him my Olympus, and we talked cameras a bit; it was clear he used to be a photographer, and had a bit of hostility for the digital age and the ensuing era of would-be professional shutterbugs. 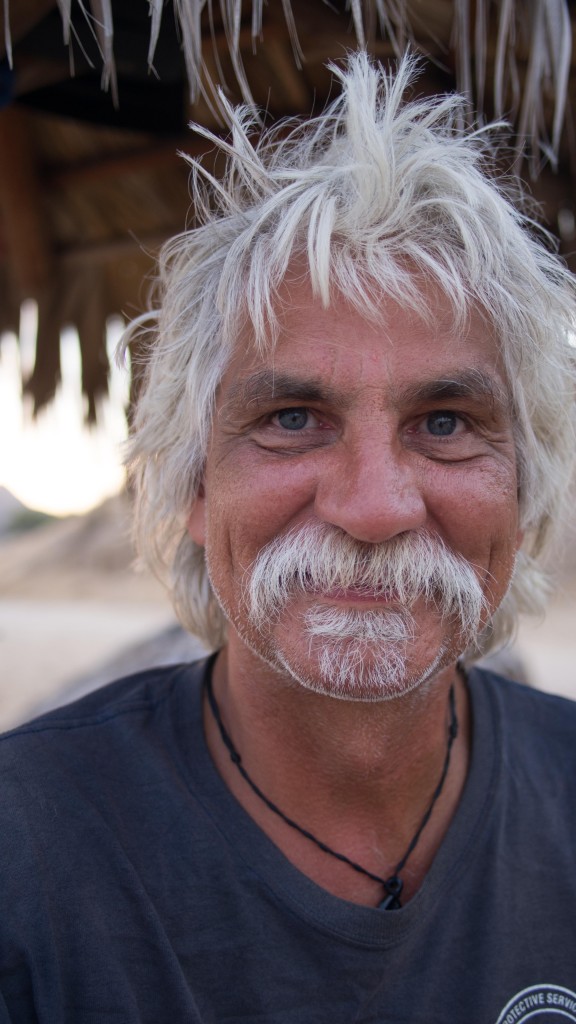 Kai had originally planned to travel around all of the Baja, but once having found Los Frailes, had remained there for the better part of two months, and had already severely delayed his return home. He’d fallen into a very regular routine of fishing, kayaking, and enjoying the beach life.

And pretty soon I did as well.

My first day I was lost and unsure of what to do with myself, spending the morning eating a breakfast of tuna fish from a can and peanut butter and then looking through my belonging, feeling a bit off in these surroundings.  I went swimming, borrowed Bernie’s ancient and leaky snorkeling gear (but it worked just fine) to explore a cove, and finished up a book on my Kindle.

Later in the day I hopped on the bike and headed to the town of Cabo Pulmo to grab some supplies and possibly arrange some scuba diving. Cabo Pulmo is four miles north of Los Frailes, and has three dive shops and three or four restaurants, I could never be quite sure, as I only ever ate at one, La Palapa.

They have the greatest fish tacos I’ve ever tasted in my life. I’m deliciously serious.

I booked a dive for the next morning, at $100 for two tanks and rental equipment included, which is a pretty good deal, grabbed some food and a few beers and headed back to the beach.

And so bright and early , I woke up, headed out to Cabo Pulmo and dove throughout the day.  Cabo Pulmo is a national marine park, and the oldest of only three coral reefs on the west coast of North America. So you’ll believe me when I tell you that the diving is spectacular.  The diversity is unbelievable, the sites are extremely easy and short to reach by panga, and the visibility is great, though according to my friend David, better in November.

This is David and his girlfriend Maryse.

I met David on my first day of diving. He showed up wearing a drysuit, a Hogarthian rig, and a Shearwater Petrel dive computer. He’s a serious diver, and runs a diving travel agency called Dazzle Dive. Yep, a diving travel agency, pretty perfect job if you ask me. We shared some beers after the dive, and decided to dive again the next day, but at the Cabo Pulmo Watersports dive shop this time.

So, yeah, this is how my paradise started, a near perfect Groundhog’s Day. I’d wake up, go swimming, eat some breakfast, ride up to Cabo Pulmo and go diving for a few hours, head back to camp in the afternoon and putz around for a bit, and then join Bernie and Kai for some conversation and beers in the evening. This went on for days, perfect days of sun and sea, early evenings and sleeping while listening to the whales breach the water, sounding like cannons going off as the plummeted back into the ocean.

It was perfect. It is perfect.

I’ll be back for sure.

A few random things did happen that I should mention.

I lost my camera in the ocean and found it again.

Here’s a compilation of all my dive videos as well.

Here are many of the sunsets I was able to capture.

So you’ll believe me when I tell you it was difficult to leave.

Whatever this trip is about, and I’m not sure yet what that is, there’s more to see and do outside of Baja.

My last night, the moon rose blood red from the ocean, an incredible image that will be etched in my mind for ever. Sadly, it proved near impossible to capture correctly with my camera gear.

I shared some whiskey with Bernie and Kai, and we talked at length about travel, life choices, and women. 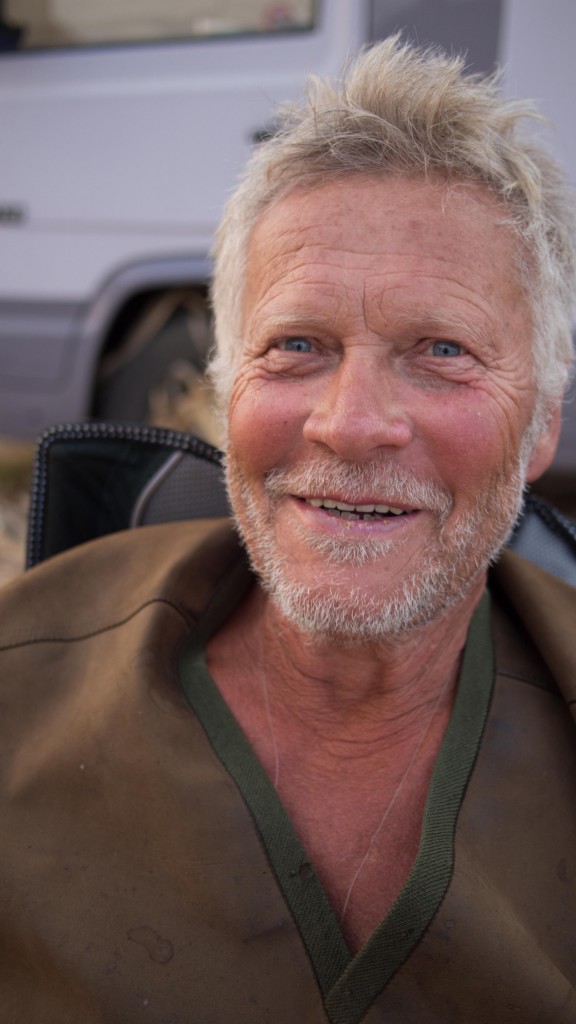 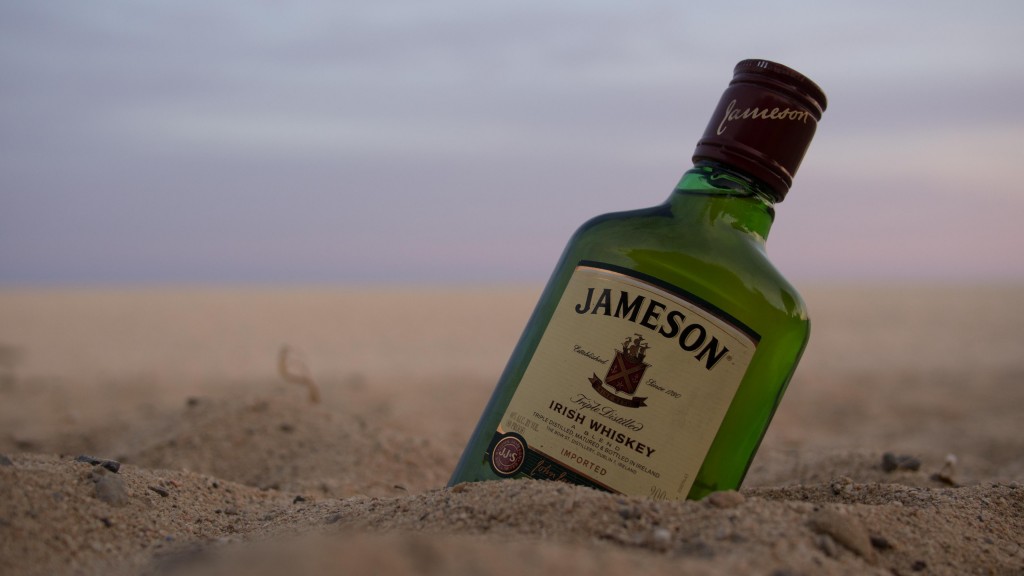 The next morning I left at sunrise.  Bernie had already gone fishing before the sun rose.

It was off to La Paz to catch a ferry. The mainland awaited.