Cabo San Lucas is a party town. Fín. Done. No más. It exists solely to ply dollar bills from tourists by getting them drunk and perhaps taking them sport fishing if they can fit it in.

To give you some indication of the kind of city I’m talking about, it’s often known as the “Fort Lauderdale of Mexico.”

That’s not to say there’s not much to like about the city, it has great restaurants, cheap drinks, and I’m told being there during Spring Break is a thing of, shall we way, glorious youthful exuberance. The disparity of wealth between the tourists (mostly Canadian from what I could tell) and the locals is pretty glaring though.

I wasn’t too excited to be there if you can tell, as I’ve found it’s pretty hard for a solo traveler to mix into the stew of group travelers which are ever so common in touristic cities like Cabo.

I had to go though, I mean, you always hear about Cabo on those horrible private school teenage drama shows that my old roommate used to love.

I arrived in Cabo San Lucas late afternoon and sat in traffic, before finding a most excellent hotel, the Cabo Inn Hotel.  It was pretty cheap at $38, they let you pull in your motorcycle into the courtyard which consists of a common table and massive jungle plants everywhere, and it’s smack dab downtown, close to everything, unlike the $800 a night resorts that my Hotels.com app was recommending me. 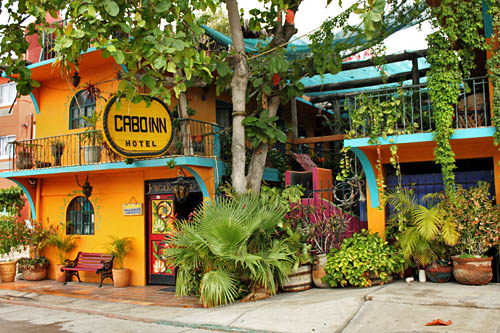 I performed the hotel ritual that has become part of my life now, and then headed out into the city to grab a beer.

First stop was Cabo Wabo, famous for being owned by Sammy Hagar.  As has been common with most of my time in the Baja, I was 20 or 30 years junior to the other patrons, but you just roll with the punches.  They had a 2 for 1 beer special going on for 50 pesos, which isn’t really a deal anywhere else in the Baja, but what can you do.

This surfer-esque guy in a straw hat asked me if I was alone, and when I mentioned I was invited me over to his table.  I was pretty sure he was going to hit on me but I wanted some company so, why not. Turns out though Mr. Hobie Higgins was just waiting for his wife and buddies, and pretty soon we had a party, with me playing the seventh wheel role.

These guys all work for a mortgage company in Oklahoma (if I’m remembering correctly), and were down here with their wives as they were the top salesman for the year.  I was pretty surprised mortgage companies were still shelling out money for these types of things, which they considered to be pretty funny in a post-recession world.

Hobie turned out to be a real wild card, always amped up and excited about life, in a madly infectious way. His official role at the mortgage company was something like “Director of Fun.” Further enquiry led me to discover that his responsibilities consisted of things like planning trips to Cabo.  I’m stunned these jobs exist, but it’s more of a “right time, right place” type of thing to get such a job, and most likely you have to create it yourself.

We got kicked out of Cabo Wabo because Hobie wanted to wear a luchador mask while drinking his beer, which the bouncers were not too keen on, so we headed to the The Giggling Marlin for some food and more drinks.

A mariachi band appeared and many Mexican versions of Elvis songs were sang. 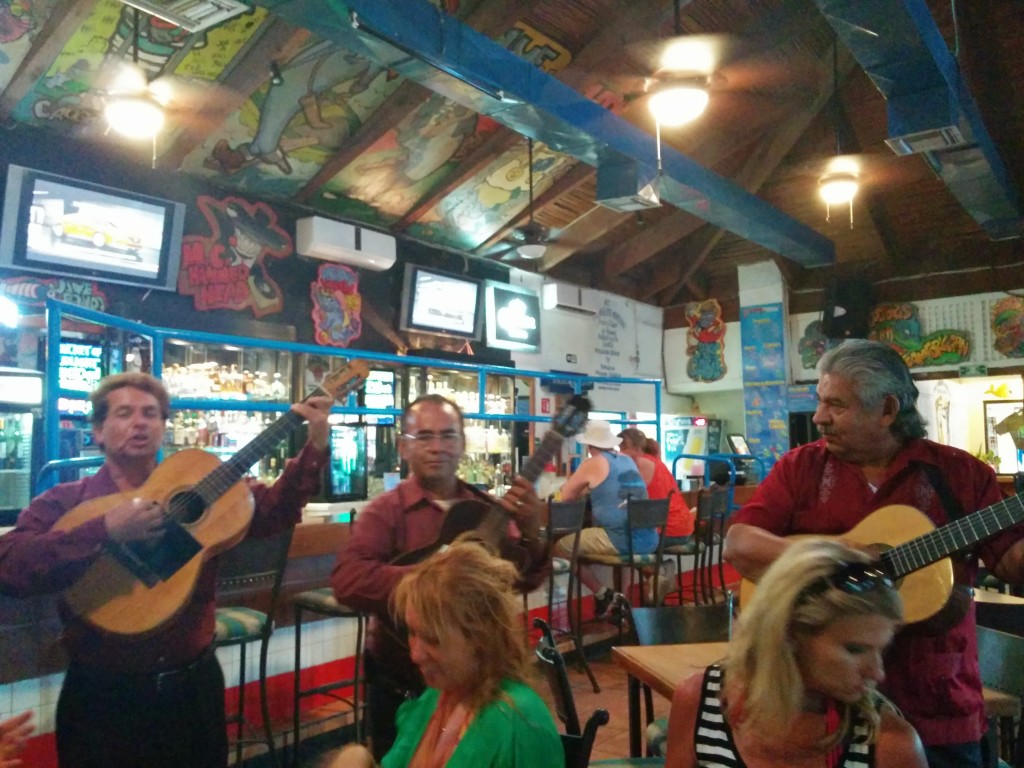 The food was…well I don’t remember, so probably fairly bland. We paid out and headed to Happy Endings, which turned out to be my favorite place.  Thousands of dollar bills are stapled all around the interior, signed with names of traveler or simple messages like “Roll Tide.”

I paid for the round of specials, which consists of two beers and two shots of tequila. 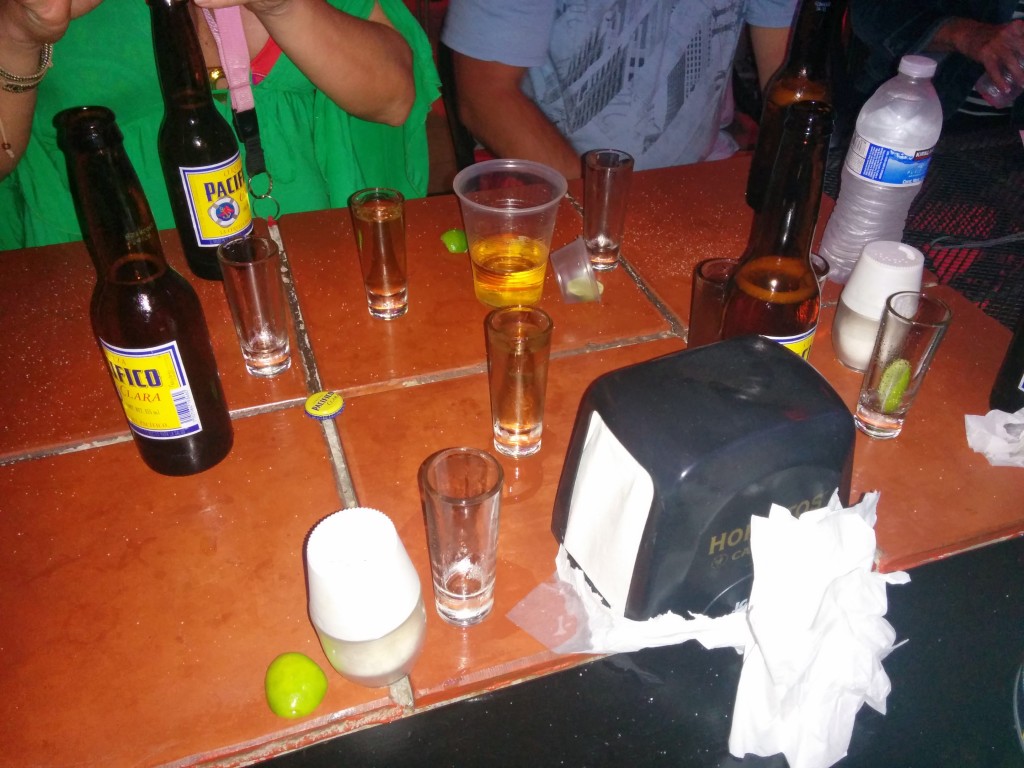 I should mention that, after having told my story (quit the job, lost the girl, time to ride the old motorcycle south because life is too short amigos) back at Cabo Wabo, Hobie was insistent that I would pay for nothing that night, reminding me that I would need that money sometime down the line.  Fair enough mate, you won’t hear me complaining. Still, I always my debts.

We quickly found out there were beer pong tables, and after much trash talking from Mr. Higgins it was off for a match, where myself and Marc (a fellow Texan) promptly represented and destroyed Hobie and his buddy. 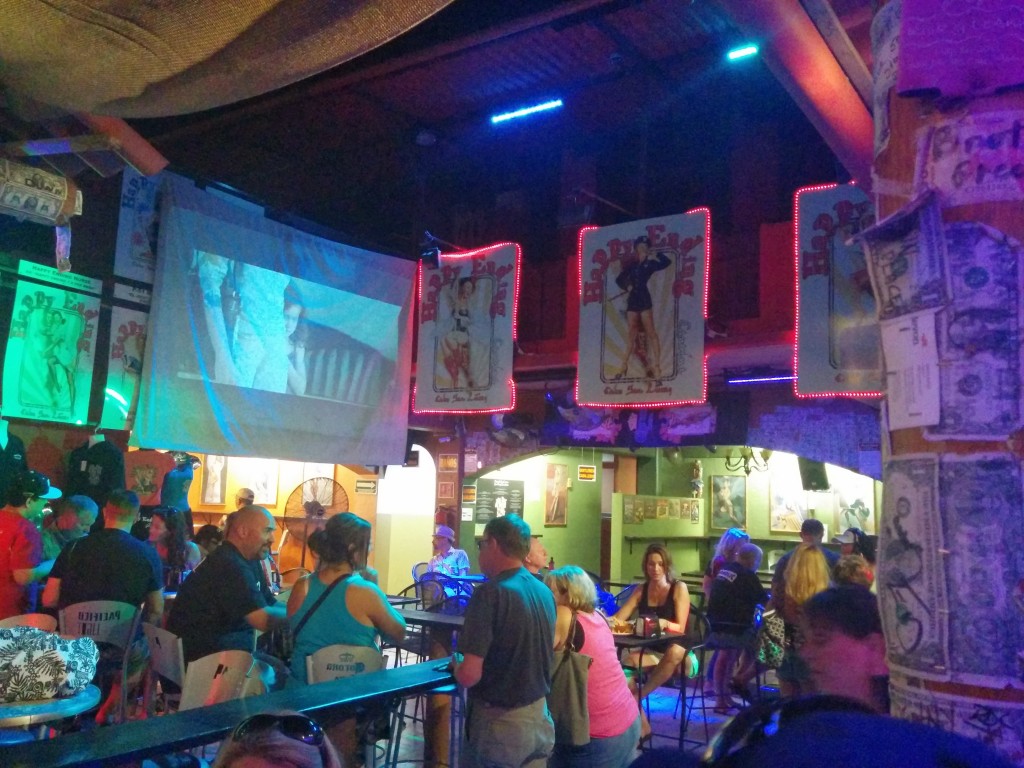 Then it was time for one last hangout, at a popular place called Squid Roe. 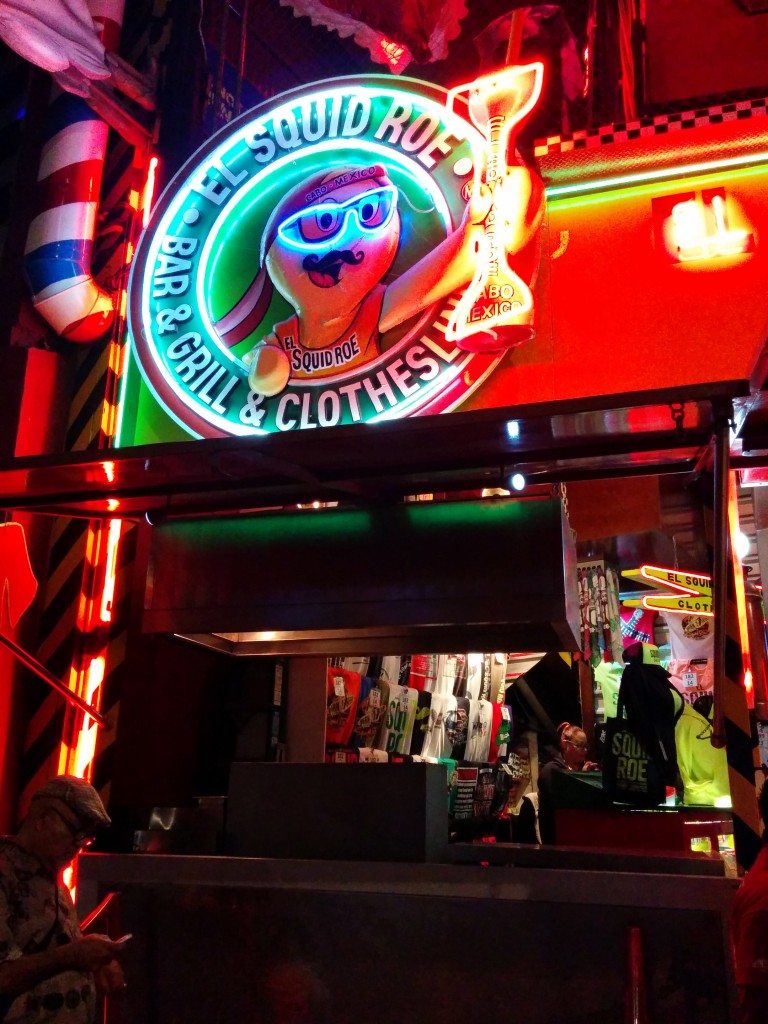 They take many forms of payment. 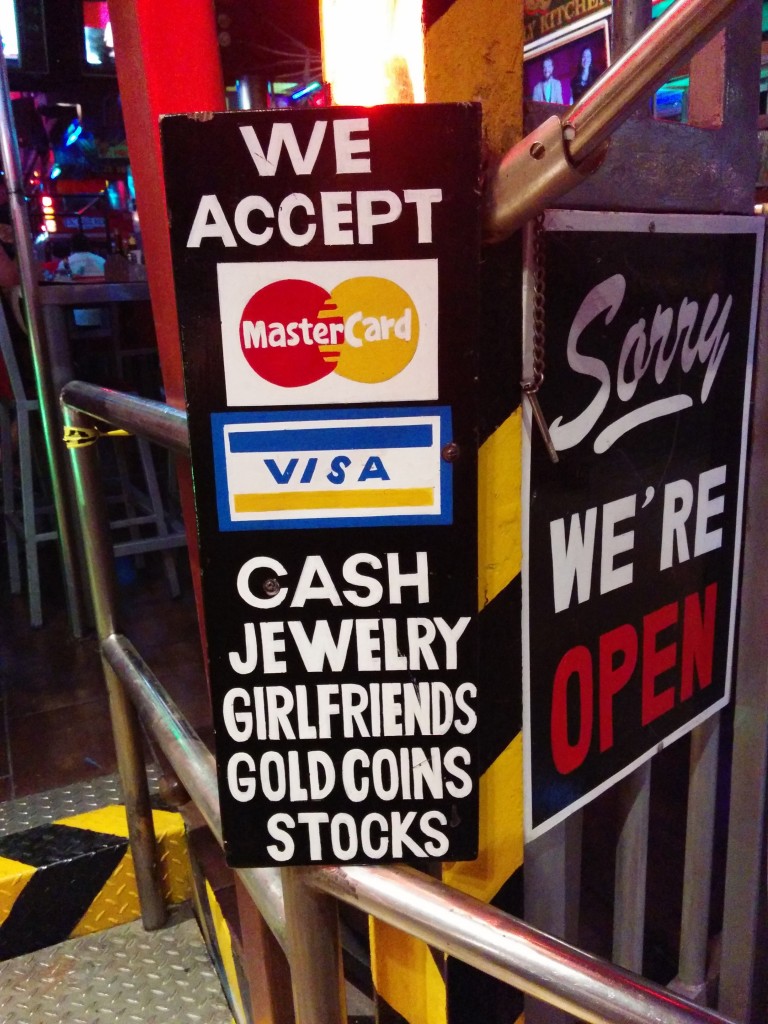 Squid Roe has banked on the “audience participation” model for entertainment, which almost certainly involves a lot of bare skin and body shots during Spring Break, but sadly it’s February, so we had to contend with the chicken dance.

At one point a “shot girl” came around offering jello shots.  We bought a few, but they were hard as rocked so we proceeded to attempt to make them stick to the ceiling, but only achieved in inventing Jell-O rain.

It turned 10PM, Hobie and crew had been out since noon and were drunk and/or tired so they called it an evening.

I had a blast meeting these folks and hanging out with them, but I was also feeling fairly run down from all the partying of the last few days.  It was time to head up the East Cape, towards Los Frailles. 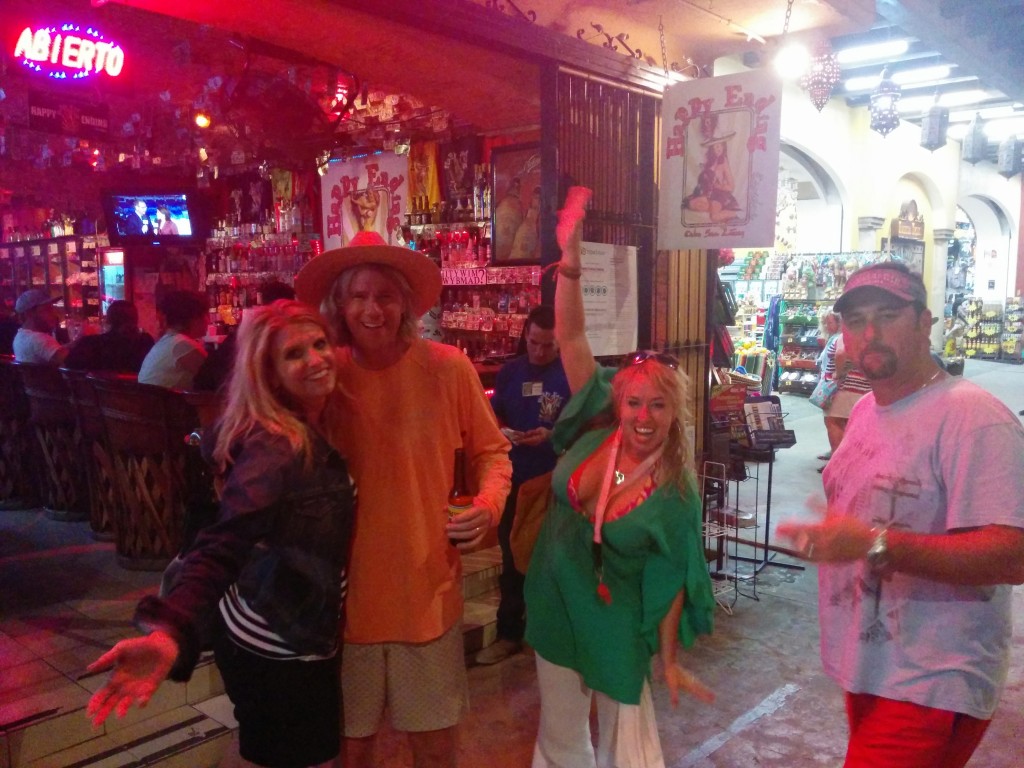 Thanks for taking a lonely traveler in amigos, until next time!