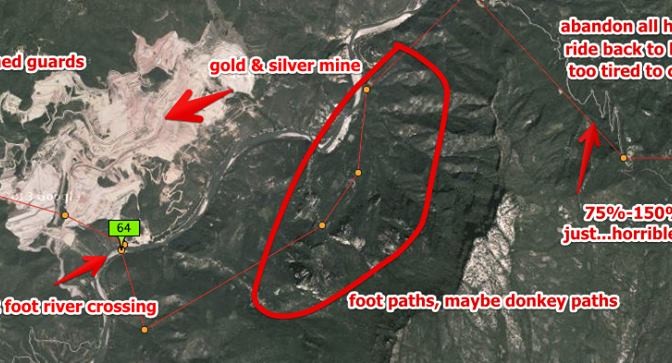 Outside the mine, we were greeted by the Rio Fuerte. At first glance, the water seemed shallow enough to ride through, but as we strode in to gauge the depth (as one does), we realized that would never work.  Cold water rushed up to my knees and into my waterproof boots, and the current was strong enough to have to grab on to rocks to maintain balance in certain areas.

As Stefan and I retreated to the shore, the mining security guard gunned his engine and plowed into the river, and we watched as the rear-end of truck began to shift to the right, being pulled by the current. This was going to be trickier than we had first thought. This was going to be an actual river crossing, not simply blasting through a puddle or small stream.  Stefan walked upstream to see if there was another, more shallow crossing, but there was none. So, we would need to push the motorcycles through, with at least three people on each machine to fight the force of the river.

Stefan’s bike was first. He fired up the engine and we began to push the bike into the river.  A few feet in and the engine died, and as Andi and I held the bike steady Stefan sparked it into life once more.  A few more feet, and much deeper, and the engine died again. Not good.  We were certain the engine was waterlocked, and Stefan, cursing and barking orders, steered and pushed while Andi and I heaved the bike onto the opposite shore. To our great relief the engine sputtered to life; no one was relishing the thought of having to do extensive repairs out there.

The rest of the bikes went much easier; we removed the panniers to lighten the load, put them in neutral and simply brute forced our way through the river. My DR650, being the lightest, was easily pushed through the river, while the GS1200 was an absolute bear.

The whole process took a little over an hour, though it wasn’t without some mishaps.

With daylight slipping away, we bid adieu to our security escort and continued on our way.  We had zero maps of the area, and my app showed no roads either, but Chris had spoken with the guard and he assured us that going left at the fork would get us to Batopilas, eventually. We were in good spirits, a river had been forged, and our destination lay just over the mountain.  I passed out some more water from my bottle, and we briefly considered refilling the rest of the bottles from the river, but decided that drinking what was undoubtedly mining runoff would probably be more trouble than the hydration was worth.

Geared up, we continued on our path, riding through some deep sand and whoops, eventually coming to the fork.  Was it right? Was it left? We were a little confused, but Chris was certain that left was correct, so on we rode.  Dehydration was starting to set in and affect our judgement, but we had to press on regardless, no one wanted to spend the night on the mountain. Well, I didn’t mind the thought, seeing as I had camping gear, but I was the only one.

The setting sun treated us to some of the most incredible panoramic scenes I’ve ever seen as we crested the top of another mountain, and descended farther into the Copper Canyon.

The road into the valley made for some extremely hairy riding; deep sand was everywhere, just waiting to attack the poor fool who grabbed too much front brake and kick him over the side of the mountain.  Further, extremely steep switchbacks met you every few hundred yards, requiring constant vigilance.  Any sort of lack of concentration, or coming in too hot, and oops, nice to have known you.

It was, without a doubt, some of the most fun I’ve ever had on this Earth.

In the valley, we tore through a river bed, and eventually ended up at a small town.  Stefan asked for directions and the indigenous natives confirmed that, yes, this was indeed a road to Batopilas.  Whether or not it was the shortest road, we’ll never know. Maybe we should have turned right at the earlier intersection? Either way, they didn’t have any treated water for us. I remember now that, at that time, we were positive that Batopilas was immediately over this next ridge.  I mean, it had to be right?

And then the wheels fell off.

The terrain we encountered next is the worst I’ve ever ridden. Being on the lightest and fastest bike, I had ridden much farther ahead than the others. Slippery rocks were everywhere, and deep gouges and ruts in the road made choosing ideal lines nearly impossible. At some point I just had to twist the throttle and hold on, hoping that the bike would carry me over whatever came next and keep me on the path. I remembered back to my times in Big Bend, and what another rider had told me one night in a bar that has stuck with me since.

“Confidence and momentum. It’s all you need to get through anything.”

Couple the bad road conditions with  faltering sunlight and (as I soon found out) a headlight that only worked 8% of the time (due to some loose wiring), and you’ve got yourself a bonafide terrifying adventure.

I had no idea how the others were managing, but there was really no where safe to stop and wait for everyone, so on and on I climbed up and over the mountain, finally coming to a level area and a T-intersection with another dirt road.

I waited a long while.

Stefan and Ira eventually showed up, and we waited a bit longer, and then Andi and Noah showed up.

Peter, Chris and Agnes were no where to be seen and after 20 minutes, with it almost being dark, we started shouting down into the valley to see if they were alright, and eventually heard Chris again.

Which means broken, in Germany. I looked at Stefan and knew what he was thinking.

No water, no light, and limited tools would make any sort of repairs damn near impossible.

We needed more information, so Stefan and I hopped on our motorcycles and rode back down the mountain. He was ahead of me, which was fine as my intermittent headlight and the growing darkness increased the pucker factor of the downhill ride. I could at least see where the cliff faces were (or had been) from his headlight. We finally came  upon the three missing riders sitting in the middle of a switchback turn.

Turns out, Chris meant they were kaput; the motorcycles were fine. the three were completely wiped out, and couldn’t (or wouldn’t) ride anymore. Emotionally and physically drained. Peter had even passed out standing after crashing for the second or third time. A long and grueling ride, probably severe dehydration, and in Peter’s case being pre-diabetic (news to me), had taken their toll. We couldn’t have half the group stay down there, and we certainly couldn’t ask the others to ride back down, so it was decided that Peter and Agnes would walk up the hill to the plateau we had found, probably a kilometer or so, and Stefan would ride Peter’s motorcycle up again.  Chris, at first adamant against riding more, eventually caved and powered up the hill on the big GS to the meeting point.

When we were finally all together again (and Stefan had returned on Peter’s bike), I whipped out my phone and looked at my mapping app; excellent! The T-intersection where we were hanging out  was on the map, and it looked like Batopilas was only 20 kilometers away.  The app said it would take an hour, so we debated on our next move. What the apps (and maps, for that matter) don’t tell you is how long it takes to ride 20km in horrible conditions with a well-worn group of riders who are dropping like flies.  A smaller town named El Rodeo was only 6 km away, and with the need for water rising by the minute, Stefan decided that he’d ride down that way with the rest of the group, as Ira’s condition demanded she have water.

There was no way Peter was going to be able to ride, so I volunteered to stay at the intersection and camp out with him over the night.  He was keen on sleeping outdoors “like a real cowboy.” Having camped out plenty in the Baja, I was content with setting up my tent and air mattress for comfort while he would just sleep on a blanket. The others said that, if they found water they’d ride back and give us some, but if they weren’t back in an hour or two to not worry about.

We watched the rest of the group ride away into the night. After setting up camp, we laid on the ground looking at the stars, and talked about the important things in life, as one does when often faced with hardships; life, love, and loss.