Despite reports to the contrary, my trip ain’t over yet! I’m holed up in Playa del Carmen and have been very lazy with the updating of the blog. Apologies!

I recall cursing into my helmet the day I left Mazatlán, having tarried longer than intended, and now for having to breeze through much of central Mexico.

Salem had mentioned to me that a surf competition was going on in Sayulita, a beach down about 5 hours south of Mazatlán. 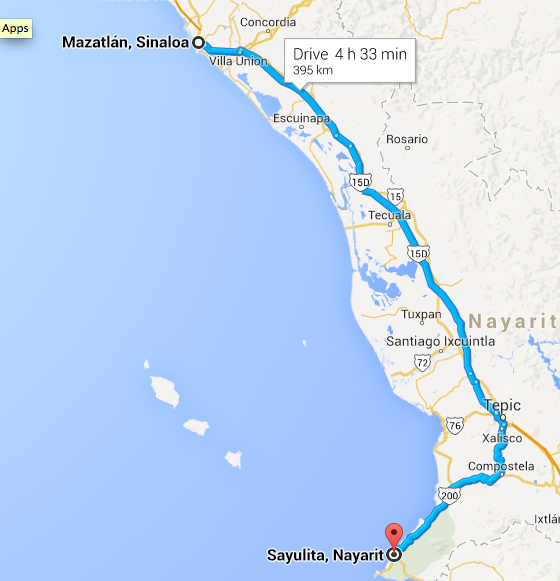 Of course, leaving at nearly 11AM on the day of departure ensured that I would miss the entire competition and arrive around sunset. Which of course is exactly what happened. Upon arrival, I rode around for a few minutes until my mind decided it wasn’t ready to camp again, so I rode another 20 minutes to the tourist town of Puerto Vallarta and checked in to some hotel.

The day had been fairly uneventful, except when I whacked my foot while riding into a road marker. I didn’t feel much until I took my boot off.

Bruised the heck out of it! Anyway, despite Puerto Vallarta’s party reputation, I stayed in that night as I had quite a ways to go the next morning. Besides, I had just partied an entire week straight.

When I woke the next day, I scarfed down some free toast and jam, hopped on the freeway and headed west. I was not expecting the ride that lay before me.

What was some fairly brushy scrubland soon turned into lush green pastures as the road carved through the Sierra Madre Occidental mountain range (the same range that contains the Copper Canyon).

At one point I stopped in a small town called Juchitlan, right outside of Guadalajara, drawn by this brilliantly white church.

I think I’ve mentioned this before, but every decent sized population center in Mexico that I’ve run across has some kind of colonial style church or cathedral.  And this one was particularly impressive.

My final destination was to be a lake town known as Ajijic, just south of Guadalajara.  I had considered staying contacting the doctors I met in Mazatlán, however I knew for sure I’d miss my deadline if I partook in the delights that I’m sure Guadalajara has to offer.  I don’t remember how I found out about Ajijic, I think perhaps some random website, but it seemed as good of a destination as any.  What I know now, of course, is that it has an expat population of something like 50,000 Americans and Canadians, which probably explains why there’s a website about the town, as well as the real estate prices there. Not that there’s anything wrong with that, mind you, it was just wholly unexpected.

Right before I rolled into town I spotted a motorcycle rider who was pushing his bike up the highway, on a shoulder the size of a human shoulder.  Pulling over, and with many hand movements and some broken Spanish I learned he had ran out of gas, so I siphoned some out of my tank, and off we rode to the next gas station. He was pretty stoked.

The guy even escorted me a few more miles before peeling off to his home, which was pretty cool, and I headed off to Ajijic.

It’s a big art town, both local and expats, and a big vacation area as well.  I pulled in right at sunset and started scouring for a hotel, but the prices were higher than some places in the US.  Eventually I found the Hotel Italo owned by a Mexican man named Italo, and 300 pesos later I had a place to store my bike and put my head.

I figured I should take some photos and grab some dinner at the lakeside while I still had light.  Here’s the results.

And that was pretty much it for Ajijic.

The real challenge, or so I told myself, lay the next day.

See, all the “bad stuff” you think happens in Mexico? Well, it really only happens in one state, Michoacán. The state is essentially close to martial law right now (or was at the time), with autodefensa groups popping up everywhere as the government sat back and did nothing about the narcos in the area. Of course to be completely fair to Michoacán (and much to the chagrin of my friends in the states of Jalisco and Sinaloa), it’s not completely isolated to that one state, but it is the place you’re most likely to run into trouble.  It’s where another rider went missing a few weeks before my arrival as well, a thought that was on my mind throughout my travels. Sadly he’s still missing.

Luckily, things seem to be getting better, much better.

Anyway, I bring all this up because I was NOT STOPPING IN MICHOACÁN. Nope, no sir, no how.  I had met a nice woman in Baja who had grown up in Michoacán, and she told me how beautiful it was, how nice the people were, etc, and even she warned me to not cross through that state (though not without getting misty eyed).

So, it was to be toll roads the entire way, non-stop until I reached the down of Puebla. This would be the safest route for me, and the most patrolled by the cops as well.

And of course, nothing happened. I’d show you photos but there are no photos to take on toll roads. Well, I did take this video while riding (hi Mom!)

I rode close to 450 miles that day, for about 8 hours, and who knows how much money I spent on toll roads. Probably $100 or more. Pulling into Puebla with 3% left on my phone, I was mentally exhausted and just tired of riding.  I managed to look on advrider.com and find a hotel someone recommended; I believe the phrasing they used was “oh, it’s decent I guess.”

I guess some of us just travel differently, but I was so tired I ponied up the $100 and proceeded to use every single complementary product in the room. Even the shower cap.